Byron Carr was last seen alive at approximately 3:30 AM , Friday November 11th. 1988, which was the beginning of a long Remembrance Day week- end. He was driving a 1987 white Ford Tempo West on Sydney Street near the corner of Great George Street, Charlottetown. He was found dead in the bedroom of his home, 24 Lapthorne Avenue, Charlottetown, 31 hours later. Time of death was determined to be between 3:30 and 9:00am, November 11th. Evidence at the scene indicated his death followed a sexual act with a male. Carr was strangled and stabbed and the killer left a note saying; ''I WILL KILL AGAIN!''

Investigators are interested in speaking to anyone who may have been on city streets at that time. Anyone with any information regarding this crime, no matter how insignificant it may seem, is asked to call the CCPD Hot Line 1 877 566-3952 or PEI Crime Stoppers 1 800 222 TIPS or click 'tips online'.

You will remain anonymous and Crime Stoppers will pay an award of $2000 to anyone who provides information that will lead to the arrest of the person(s) responsible for the murder of Byron Carr. "Crime Stoppers is not about telling on people . . .It is about protecting your family, your home and your community!"


If anyone has information they are asked to Call the Charlottetown Police, Crime Stoppers or the Byron Carr Hotline 1-887-566-3952. 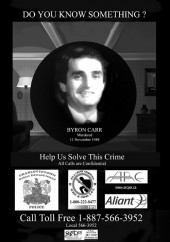